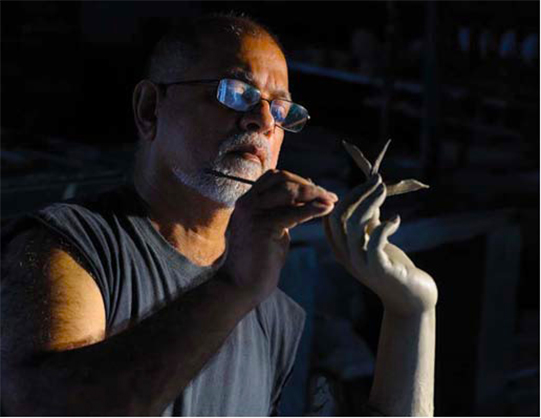 The ‘Leaf & Artisan’ Trophy embedded with a blue topaz gemstone is deeply symbolic of the ambitions that Dilmah Founder Merrill J. Fernando and his sons had in embarking on an eight year journey to reimagine the world’s tea ceremony. In striving to deliver metamorphosis that would see the 18th Century tradition transformed into a more engaging and relevant form for the 21st Century, there was as much emphasis on innovation as on honouring tradition.

The Genesis of the experience of fine tea begins with the artisan leaf – two leaves and a bud – which are imbued with natural elements that define the appearance of tea once it is made, the colour, strength, flavour, texture, fragrance and a host of other aspects which form the appreciation of tea on eye, nose and palate. The sublime pleasure in tea across 5 senses originates in the balance and inter-relationship of over 300 different natural elements in the leaf, the composition of which is influenced by nature. It is the influence of sunlight, rainfall, humidity, wind, soil and the multitude of natural climatic and soil elements that determine whether a tea will offer light, fruity notes or a rich and robust character. It is the leaf – two leaves and a bud – that is the bearer of these unique attributes that have for centuries evoked pleasure in the aroma, appearance and taste and natural goodness in tea. 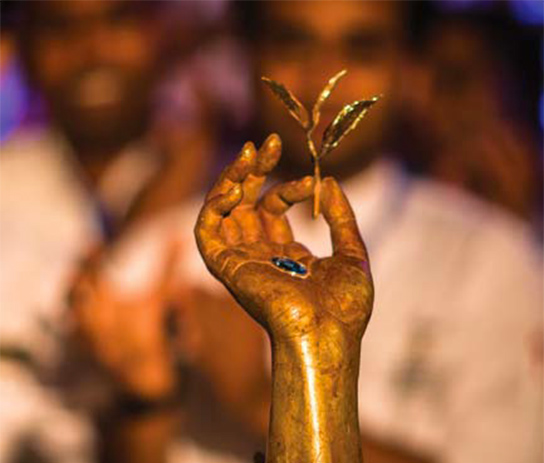 The hand symbolises the fundamental importance of the artisanal method of manufacturing tea. From the handpicking of the leaf – a demanding method which is nevertheless critical to the quality in tea as mechanisation can come only with compromise on leaf standard – the traditional method of manufacture known as the orthodox method, retains the principles of making the fresh shoots of the Camellia Sinensis plant into tea that were crystallised by physicians in ancient China. The technique focuses on natural enzymatic oxidation that is achieved through the natural elements present in the leaf.

The teamaker therefore facilitates but does not determine quality in tea beyond the decision whether to produce green, Oolong or black tea. The variation in character of tea that is possible through changes in rolling, fermentation and firing that the teamaker can influence necessarily require the overriding compliance of nature in the form of the leaf. The orthodox method essentially nurtures what nature has already crafted in the leaf and the role of the teamaker is therefore secondary to the influence of nature. Our trophy symbolises this partnership which in ancient China was described as the influence of heaven, earth and man – heaven being wind, rainfall, sunshine, earth being the soil and man being the artisanal method of manufacture. 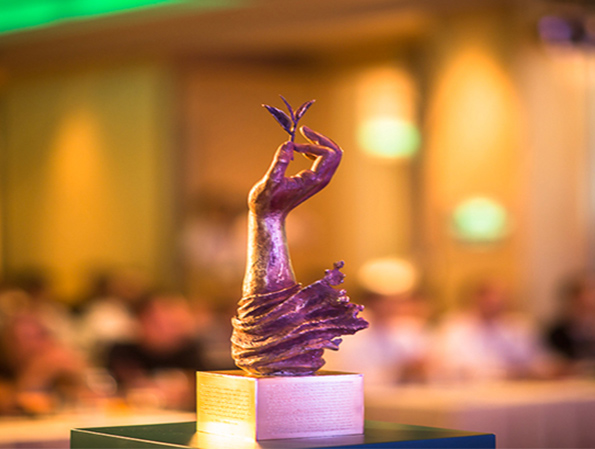 The blue topaz, a gemstone mined in the tea country of Sri Lanka, is placed in a silver setting in the palm of the hand that holds the leaf. It represents the precious nature of tea, an industry that has been the mainstay of the Sri Lankan economy for centuries and on which millions depend for their livelihood. The topaz in the palm forms the precious reflection of the leaf. In crafting afternoon tea for the 21st century we look to the future of the experience of tea, understanding 21st century lifestyles, desires and needs but always honouring the influence of nature. The leaf and artisan represent that influence in the apical two leaves and bud, held aloft by the hand of the artisan that respects the rhythm of nature in preparing the tender shoots of Camellia Sinensis for our appreciation.